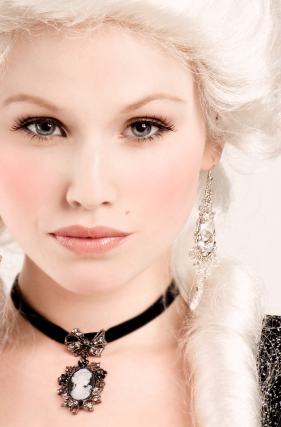 Makeup comes full circle, and us ladies..well, we’ve come a long way. Cosmetics have been both praised and despised throughout history. From being a symbol of high class to being a mark of prostitution, from being despised by totalitarian dictators to even being banned by the Nazis during World War II, make-up has come full circle. No longer a privilege of the wealthy or a tawdry symbol for the sale of sex, cosmetics today have become a woman’s symbol of freedom, a way of expressing her personality, passion and beauty with a simple swipe of lipstick or dab of red blush.

But it took centuries of cosmetics history to get us this far. In the Middle Ages, makeup was a status symbol of the rich. Ladies of high society frequently dabbed white lead powder on their cheeks to go dancing at the ball. Dashing knights brought home samples of cosmetics from their visits to the Middle East, winning the heart of many a lady with rare Eastern oils and perfumes.

Later in the 19th century, makeup was the mark of prostitutes, who used dashing eye shadow to lure Victorian aristocrats to their beds, perhaps picking their pockets by morning. Even early Bible stories demoralize the use of eye shadow and other cosmetics. In 400 B.C., Jezebel tried a little mascara for the first time, only to be called an assassin and thrown out the window by the King of Israel, splattering on the rocks below for the dogs to eat her bones. Thankfully for the cosmetics industry, Biblical days are behind us!

Adolph Hitler was known for telling many ladies that makeup was for clowns, and not becoming of someone of the master race. He frequently teased his mistress, Eva Braun about her frequent use of makeup, which she wore everyday. In fact when Hitler planned to ban the use of cosmetics outright during World War II, Eva furiously confronted the Fuhrer.  Instead of banning them explicitly, the chided dictator quietly ceased their production so as not to offend his mistress.

Though cosmetics’ history is full of demonization and blame for the ladies who chose to use them, today we live in a new age. Women of all classes, nationalities, and races enjoy the use of make-up to bring out their beauty and make them their own. Make-up has become a symbol of freedom, a personal expression of loveliness in which women proclaim who they are. Whether a girl wants to turn on a little romance, look dashing and professional in the office, or just feel good about herself when she looks in the mirror, cosmetics turn life on.

Don’t you deserve to be beautiful? If makeup makes us all clowns, life must be a circus!