When an actress steps out onto a stage, she walks into the middle of the audience’s imagination.
Any stage makeup artist needs to keep this in mind.

Unlike using cosmetics at home, makeup for the theater is designed to make us something we’re not. On stage, we are pretending, we are becoming somebody else. Theatrical makeup transforms us into the audience’s imagination.

Which makes it vital to mask what an actor or actress looks like in real life. When working with stage makeup, a cosmetic artist blends creativity and imagination to transform the theatrical player into the character, so that we can live, breathe and taste the new personification in all the splendor of theatrical imagination.

Whether working for the stage or the movie screen, theatrical makeup artists must first cover or remove any negative features of the actor or actress, angles or blemishes that may distract or portray the character in an unsatisfactory light.

By the same stroke of the makeup brush, however, some negative features can be highlighted or enhanced in order to make a villain look especially evil, or to add character. Just be sure that the makeup does not distract or subtract from the visual flow of the performance.

The most obvious distraction is a tattoo, since body art generally marks the individuality of the actor or actress and not the character. Most people wouldn’t realize it, but many famous performers like Johnny Depp are covered in tattoos, which have to be meticulously covered anytime he is on camera.

Even if new tattoos need to be added in the case of a pirate character, musician or maybe a villain, those shouldn’t be the original tattoos of the performer. Tattoos indicate individuality. A performer’s tattoos are their own. 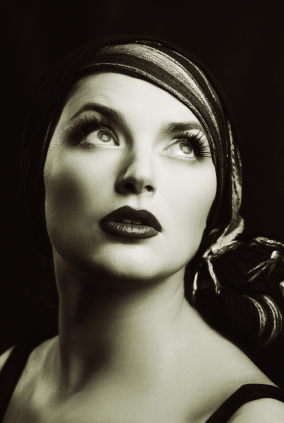 When they are portraying a character in the audience’s imagination, any visible tattoos should be created purposefully to suit the character, not the personality of the actor or actress.

Generally, using less makeup is preferable, depending on the size of the theater, the lighting and the type of production. Unlike personal cosmetics, theatrical makeup can often be harsh on a performer’s skin and can have allergic reactions.

Too thick a foundation can cause a fair-skinned actress’s face to turn an unsightly orange, adding an unnatural element to the production that harms believability. Practice and experiment before opening night to get the amount just right.

But above all, blend stage makeup to bring out character. Theater is about imagination, and the best theatrical makeup is creative and adds the personality the director hones and the audience looks for. Make the audience believe. Make them forget there’s a stage in the first place.